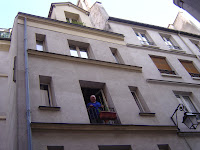 Jack and I spent a cold week in Paris as our mutual anniversary/Christmas present, and did things a little differently this time. Instead of renting a hotel room, we took an apartment through a rental firm called Vacation in Paris, selecting an area unfrequented by tourists.
Our third-floor apartment (second floor in France) was just off Rue Montorgeuil, a market street where I'd shopped and lingered on a previous visit. The street offers everything you could wish - three cheese shops, three or four boulangeries, a dozen or more restaurants, a spice shop, two wine shops, half a dozen butchers, flower stalls, fruit shops, chocolatiers, and on and on. More than anything, it offered a chance to take part in French daily life and the community of the Second Arrondissement.
The most magical moment: getting up early on the final morning we were there, putting on my coat to go out for fresh bread for breakfast, and walking out into a gentle snowfall. At the Stohrer shop (making the best croissants and spectacular pastries since 1730), the golden boxes of candy and glazed viennoiseries glowed, and everywhere along the cobbled street, the shopowners were busy laying out fruit and fish and putting up awnings.
Of course, dragging our suitcases to the Metro a couple of hours later was less magical than muscular ....
I had an interesting lunch with Carsten Sprotte, an American in Paris who's launched Parisharing, a network for home exchanges/rentals. While we learned of it after making our arrangements, it sounds like an intriguing program - yet another alternative to hotels. We'll keep in touch for the eventual day when the air miles add up ...
Til then, here's a glowing tribute to the City of Light, thanks to Carsten's website:
The Eiffel Tower
Posted by Valerienieman at Wednesday, December 30, 2009