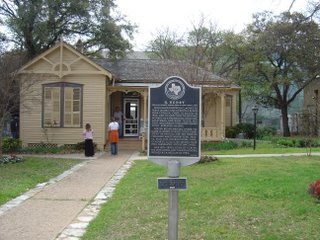 The Austin Hilton is just across the street from the house where O.Henry lived, a mustard-yellow cottage distinguished only by its eccentric survival in the middle of massive hotel construction to house visitors to Austin's SXSW and Sixth Street and Longhorns games.
I don't know how many of the thousands of writers at the Associated Writing Programs Conference (earlier this month in Austin) found their way to the house. See the O.Henry Park Website
It didn't offer much - three rooms, the desk he wrote at and the bed he slept in, a map that William S. Porter drew while he worked in the land office. That's the attraction of such sites, the remnant vibes of Thomas Wolfe in his mother's Asheville boardinghouse or Edgar Allen Poe in the cramped garrett from which he looked out over nighttime Baltimore.
I wasn't headed there, really, when I rounded the corner by the fire station and remembered afternoons as a reporter, passing the fire station downtown, the firefighters washing their trucks and cars as these were in Austin. Then I saw the little plot of grass, and two children blowing bubbles on the front walk. The frenetic tent-raising for the Big Event (SXSW) faded. This was old Austin, a neighborhood where kids played and the crape myrtle tree in the front yard was getting ready to shoulder its annual load of bloom (pink? purple?)
The tour didn't take long. The young woman who presides over the house knew the story of the writer know for his surprise endings but pretty much forgotten today, as my students remind me by their blank looks when I mention him.
That's the case I suppose in Austin as it is here in Greensboro, where Porter was born and educated and worked his first job, in the pharmacy long gone but marked downtown by a plaque. The Greensboro Historical Museum has a re-creation of the pharmacy, and his name is recalled in conferences and plays and on an elegant new hotel that memorializes the downtown version demolished decades ago.
I stood in front of the writing desk where he had worked, and thought, there must be something here, some romantic whiff of creation. The sun was bright outside. The city was preparing for moviemakers and musicians, the creative royalty of our time. I tried to frame the desk in a photo but it seemed very small, very awkward, out of touch, out of time.
The writer's conference continued.
Posted by Valerienieman at Thursday, March 23, 2006