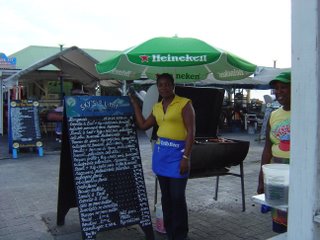 I'm working on a new novel, digging into the notes I made last spring at St. Martin for a crucial chapter. The pictures still vibrate in orange, magenta and turquoise, whether opening on the computer screen or in my thoughts, but tell you the truth, what comes back the clearest is the scent of barbecure smoke from the lolos in the center of Grand Case.
Fish, shrimp, chicken - the aromas blew up the street on the sea breeze - for an adopted Carolina girl made even sweeter by the memory of barbecues and smoky fire pits here in the Piedmont.
I've attached a short essay on the lolos - wondering if Jacqueline is still at her post at Sky's the Limit. I'll always treasure her greetings in the morning as she prepared food for the day, and I carried a baguette back to the room for breakfast.

GRAND CASE, ST. MARTIN - We walked into the village that first night, quickly becoming accustomed to the Alphonse-and-Gaston of car horns – please watch out, please go, thank you! Too travel-stained for fine restaurants, we were lured by the swirling smoke of the other culinary secret of Grand Case, the lolos.
Tall chalkboards present the day’s offerings at open-air pavilions. The lolos offer grilled ribs, chicken, crab backs and fish – with side orders of fried plantains, mac and cheese, French fries. The “plates of food” for $8 or $10 would be familiar in the American South as “meat and two,” and just as satisfying.
We slid into a Formica-topped table at Talk of the Town, where Jack ordered swordfish and I chose snapper – along with plantain and rice and beans. Slabs of fish arrived sizzling off the grill, smoky dark, with a coating of olive oil and garlic, tender and white inside. No room for homemade coconut ice cream – alas, it wasn’t to hit the menu again during our stay.
The lolos have established a reputation on “Restaurant Row.” Oil-barrel cookers, sliced in half and raised on legs, are fired with chunks of locally made hardwood charcoal. The half-dozen enterprises wedged between the beach and the busy street each offer something unique, from lobster to goat.
“This July will give us two years,” says Jacqueline Lake, owner of Sky’s the Limit. “Someone had it before, they put it in the paper, it had to be someone from Grand Case, not Marigot or Colombier.” (The capital and a town on this island totalling 37 square miles, including the Dutch side.) “My husband said you always like to cook, so I wrote a letter, and we were lucky enough to get it.”
Meat is seasoned with a mixture that includes salt and a coloring agent – one of Jackie’s helpers holds up an orange box, Sazon. Each table has a bottle of Matouk’s Calypso Sauce - mostly it seemed made of Scotch bonnet peppers.
The blend of flavors and nationalities is characteristic. This is a creole culture of local folks and visitors from St. Barth’s, people who speak French from school and American from the radio. Three women from the Ivy League ponder a menu close to the island philosopher who leans on the bar with a plastic shot glass. A shih-tzu on a leash keeps its distance from island dogs with yellow Arawak eyes.
The food brings everyone together.
The hardest thing, Jackie says, is to “make sure the girls are straight, all happy, You bust your head to keep the customer happy. Cooking is a whole lot of work, but no problem.”
Posted by Valerienieman at Monday, May 08, 2006